Have you ever started teaching a new behavior and then wished you hadn’t?  Have you ever done this having painted yourself into a corner by publicly declaring your intentions? That’s even more fun.  A few months ago, I made that very mistake by publicly announcing I was going to teach my dog, Breezy (AKA Pooh), to open his mouth for tooth exams.  This is the story of a somewhat rocky journey…

First, get the behavior:

Easy!  Dogs open their mouths all the time, right?  How hard can it be to capture, lure or shape it?  For some, very easy.  For us? Not so much.

This was my first choice.  On the face of it, using targets seemed like a no-brainer.  It is a very common way to teach a dog to open its mouth.  Almost every video of dogs I’ve seen used this method.  Pooh understands nose and chin targets.  In fact, he has a very strong sustained nose target – a full minute when timed. However, for a dog with such a strong sustained nose touch, it proved useless.

After many sessions of trying all I had was…. variations on a sustained target.  He WOULD NOT MOVE! We could get a lovely chin rest.  We had perfect, rock solid tooth targeting. Nose to hand, any position, no problem. Unfortunately, they all resulted in perfect stillness – except the eyes.  He would roll his eyes as if to say ‘well, come on! Click already!”.

I’m led to believe that this is a common method used by zoo trainers.  The large target is presented and the animal is clicked for opening their mouth in anticipation of grabbing at it. Maybe this works well because the animal doesn’t actually have to carry the item?  I don’t know, but for us I still couldn’t get any indication that Pooh was opening his mouth for any reason other than to grab/target the object.  There was very little anticipatory opening – either my timing really sucks or he was just incredibly quick and focused on the end result; he is, after all, a highly trained competition obedience dog – trained to retrieve just about anything. Present an object?  He’s thinking of carrying it.  Back to the drawing board.

Another tried and tested method by the zoo community.  This time the animal is clicked for opening its mouth in anticipation of the food reward.  This sort of worked, maybe.  However, a bit too much learning history of manners and impulse control made this a little confusing and somewhat stressful.  It felt like I was teasing him.  Once the penny dropped that he was ‘doing something’ that made the click happen, he started offering previously learned behaviors such as eye contact and lick-your-nose. We both got frustrated. Oh well.  Another idea bites the dust.

After posting a few snippets of our struggles, someone suggested capturing the mouth open from tossing treats.  This was great fun, improved my food throwing and Pooh’s catching no end but didn’t further our quest much.  Again, timing was an issue and Pooh is not a dog to stand around with his mouth open hoping your aim is good. LOL

By this point, I’d been struggling for weeks and I’d nearly given up.  However, I am nothing if not stubborn!  Re-watching a few of the earlier videos I saw something I’d missed the first times I’d viewed them: Pooh opened his mouth in anticipation when I stuck my thumb out.  There were a few times I’d been trying to place my thumb on his upper lip and missed, it had gone in his mouth which he’d obligingly opened for it – and I’d clicked it.  This was not intentional but hey, who cares! I could use it.

After some work we got to the stage where I’d present my thumb, he would offer a ‘top jaw target’ (usually resting his front incisors on my thumb) and stay there with his mouth a little bit open.  We were back to the duration ‘freeze in place’ problem.  Ok.  I bit the bullet and decided to try a physical prompt to see if I could get that bottom jaw to move even slightly.  I really didn’t want this to be aversive so I was very cautious about how I introduced it.  A very light touch with my other hand, while maintaining the ‘thumb target’ saw his lower jaw move.  YES!!!!  The process was:

I was hoping that by linking everything into a very predictable tight sequence the ‘present thumb’ cue would eventually cue the whole lot and I’d be able to drop the physical prompt.  We stayed at this point for quite some time.  Repeatedly I tried to fade the prompt. Repeatedly he told me that without it he was fixed in place.  Targets mean duration.

I was too close to give up now!

One of the things we as dog trainers are repeatedly told is ‘avoid unnecessary frustration’.  Good advice and something I try my best to do in my training.  However, for this, I decided that maybe a bit of frustration would be my friend.  What happens when you get frustration? Usually, the animal offers something else.  I decided to see if Pooh had been noticing what he was doing every time I’d touched his lower teeth.

I gave my thumb target cue – he gave me a lovely thumb/tooth rest.  I waited. He rolled his eyes. I waited longer. He started adding sound effects.  At this point, I was almost ready to bail.  He lowered his bottom jaw.  Click – PARTY!!!

You will never believe how much patience that bit took. It felt horrible!!

A few weeks of shaping that initial move and I had almost what I wanted – a cue and a distinct ‘open mouth’ behavior.

Time to add back some duration.  Pooh understands ‘wait’ to mean freeze in place.  Because it was positively trained I don’t find it adds stress or conflict so I’m happy to use it to ‘explain’ a task to him. So, by cuing ‘wait’ instead of clicking at the widest point of the open mouth, I quickly got ‘open and stay open’.  It was pretty easy to drop the verbal ‘wait’; it’s a process I’ve used a lot and he understands the game well so I continue to use it to ‘explain’ something to him as necessary.

It’s all very well to be able to ask a dog to open its mouth for you, however, it won’t be much use in real life if it’s not ‘proofed’ and the only person who can cue it is the owner.  I’d like to be able to use this in a veterinary setting if possible. So, the steps we are working on now are adding context and generalising to other people.  I am at the stage where I can shine a torch in his mouth, and peer about.

Next, I will see if I can lift lips or touch teeth with a pen.  This might take a while but we’re on more solid ground here because Pooh has already worked through many, many behaviors where ‘weird stuff to be ignored’ has been added.  He knows the game.

I have also had my husband start cuing the open mouth behavior.  Pooh is less confident about this but it’s coming.  The first time he asked, Pooh looked at him, looked at me, looked back at the hand signal and offered the tooth target behavior.  The opening of the jaw took a couple more reps but we’re getting there nicely now.

Wouldn’t it be wonderful if next time my vet wants to check his teeth I can tell him how to ask – and Pooh will be able to have his oral exam without any pressure or restraint! A goal definitely worth working for I think! 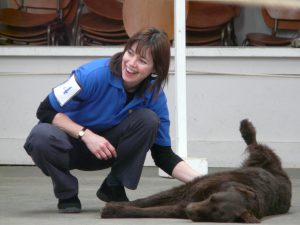 Sarah originally hails from the UK but swapped hemispheres 15 years ago and now calls Dunedin (New Zealand) home. She is a self-confessed science geek and avidly devours the latest research and thoughts of the R+ training community. Sarah grew up surround by dogs and farm animals in the beautiful Sussex countryside, then moved on to working with horses before returning to formal education. Her degree in Animal Behaviour and Psychology channeled an early fascination with the natural world into a life-long love of learning.

Over the last 12 years, Sarah has been a strong advocate for R+ in Dog club training at all levels. Her personal training goals have focused on showing what R+ training can achieve in the Competition Obedience ring (an area renowned for less than kind training methods) making her border collie/husky, Pooh, up to Obedience Grand Champion in 2016.   Since becoming a professional dog trainer she has focused full time on ways to better communicate the joys, benefits, and subtleties of reward-based training for pet owners and dog sport competitors. If you would like to find out more, she can be found on Facebook and online.