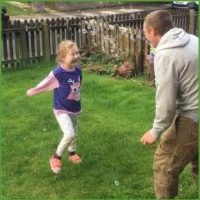 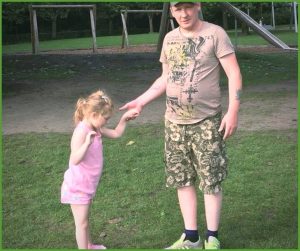 Sean resides in Manchester UK, where he lives with his Wife, his American Bulldog Beau & his 8 year old Daughter Tink. Sean started to learn about behaviour Analysis in 2011, shortly before Tink was born, so that he could train his dog and – at the time – in preparation for his daughter. And then as Tink was approaching 2 years old it was discovered that she had a rare genetic condition – AP2S1, as well as FHH3 & severe autism. This resulted in Sean searching for ways to help Tink & his explorations led him to connect with Joan Orr, Theresa McKeon and Martha Gabler from TAG teach international – which changed Sean’s & his family’s life!

Sean & Tink’s story is a testament to well applied behaviour analysis principles and in an extremely testing environment. And as practitioners with non human species we as a community have acknowledged and embraced the brave learning of this great team. Sean presented on this journey in 2017 at Chirag Patel’s WOOF conference in the UK and he enthusiastically jumps at opportunities to share with a community, which he says has give so much back to him.