In this episode I talk to Chris Jenkins, the COO of Steve Martin’s Natural Encounters (NEI). I had so much fun recording this podcast and as a bird nerd myself was very envious of the AMAZING work the company is doing with free flight Macaws. Here is a list of some of the really cool things we discuss; 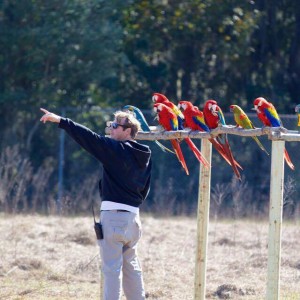 Chris Jenkins’ work with animals began with a summer job at Sea-world in San Diego, California. After obtaining a degree in Psychology from UC Davis, Chris volunteered at the Sacramento Zoo until he decided to pursue a career working with animals full time. In 2002, Chris was accepted into the Exotic Animal Training and Management Program at Moorpark College. Upon graduation, he worked as a wildlife educator at inner city schools in Los Angeles. Chris has worked for Natural Encounters (NEI) since 2005, and is currently the company’s Chief Operating Officer (COO). In addition to overseeing the company’s shows at a major animal theme park in Central Florida, Chris is also a training workshop instructor and spends time traveling to other animals facilities as an NEI training and show development consultant. Chris is an IATCB (International Avian Trainers Certification Board) certified professional bird trainer and member of AZA (Association of Zoos & Aquariums), ABMA (The Animal Behavior Management Alliance) and IAATE (The International Association of Avian Trainers and Educators).

Links mentioned in this episode;