Moonlit Sanctuary is a privately owned Wildlife and Conservation Park, involved in a number of conservation programs, as well as a commitment to educating its visitors whilst maintain a high standard of animal welfare.

For many years the only animal training that happened at the park was based around encounter animals and basic husbandry of a couple of species, such as dingoes. In 2015, keepers worked with an animal trainer to create a Conservation in Action show, which includes free flight birds, mammals and recently training has extended to reptiles.

Whilst initially utilised as a tool to increase visitor interaction, and hence education, we have now begun training animals to assist in their own husbandry/participate voluntarily in their own health checks, and remove themselves from their enclosures (if desired) for maintenance. All using positive reinforcement techniques.

My training journey commenced with Lacie, the lace monitor – creative name I know! Lacie had no prior training, nor did I. She very rarely had positive interactions with keeping staff aside from her feeding time, which consisted of a bowl being dropped over the wall into her enclosure from outside. Historically to health check her, she had been forcibly caught and restrained whilst being weighed, checked over and removed from the enclosure whilst maintenance occurred.

However, handling Lacie at all posed a risk – with a very powerful tail, long and sharp nails and a nasty bite she was a formidable opponent. Not only was it dangerous for us to interact with her in this way, it was extremely stressful for her also. She communicated this to us by loud hissing, writhing away from grips and attempting to whip, scratch and bite. I had two bits of information to go off:

Initially I was hesitant to train such a ‘respectfully powerful’ lace monitor. – I was intimidated, apprehensive and even scared of her, and I dare say she felt much the same about me. Progress was difficult to see and came very slowly. I begun by loading a clicker, which in retrospect was the most difficult thing to train. This may have been because we had not built a relationship and trusting bond at this stage, or perhaps because I could not interpret her body language to the same extent as I am able to now.

I was unsure if she was responsive to the clicker, to my hand movements, me dropping the food or another antecedent that was not obvious to me. All of this training has been done from outside of the enclosure, and numerous food delivery methods were trialled (and largely failed as you can see below). I decided to simply ‘drop’ balls of mince on to the perches and other smooth surfaces in her enclosure.

In consultation with more experienced keepers, Lacie was introduced to a target stick. Her body language became clearer to me at this point. If she was ‘uncomfortable’, she would raise her head high, coil her tail, clench her hind legs and simply walk away from me. Whilst it was not the behaviour I desired, it provided clarity as to where the limits of our trust bank stood.

With a prior learning that objects coming over Lacie’s head were used to immobilise and catch her, I predicted that she may perceive a target stick as an aversive stimulus. It took countless sessions over numerous weeks (and an immense amount of frustration and feelings of inadequacy) to make any headway with the target sticks. Subtle changes started to occur in her body language. Her eyes would steadily stay on me during the training; she was focused. She had now learnt that I meant food was coming – and that I was pretty alright due to this.

Her tail became less and less coiled when the target stick, and myself, were present. If it were coiled, her legs would not be clenched and she would not walk away. Eventually I could lower the stick into the enclosure, have her look at it, *click* and be rewarded. Once her look became direct and obvious, I altered the criteria – encouraging her to move towards the target stick. At the time I was unsure how to do this, but thankfully she was not.

I clearly remember a moment I shared with her at this stage- she looked at the target stick for ~3 seconds, then looked directly in to my eyes as if to say ‘Where is my food? I have done the behaviour thank you very much’. I think it was in this moment that I truly appreciated her intelligence, her capability of thinking and ultimately her choice and ‘animality’. Thankfully, it was also after this glance that she took a step closer to the target stick.

Now, she is a completely target trained and ‘respectfully powerful’ lace monitor. Most sessions she eagerly awaits me, except for when it is too hot or cold. I have also introduced her to a set of scales, targeted her on to them and rewarded her for stationing on them- she weighs herself! No more capture and restraint for this aspect of her husbandry.

Going forward, I intend to utilise target training to crate train her and get her to participate in her own husbandry and health checks- with Lacie maintaining complete choice. However, life is not perfect and training is not perfect. We have had setbacks both minor and major, with the onset of winter weather greatly impacting her eagerness for training and her food consumption. Currently, I feel as if training is in limbo – we cannot currently move forwards, and I am questioning if she will retain her learnt behaviours or forget them (and me) by Spring. Optimism and hope, however, are integral to working in the zoo keeping industry, and I will wait with baited breath for our next learning opportunity together!

Training and animal welfare go hand in hand. It is incredibly exciting to be involved in this movement, and be given a platform to educate visitors as to the depth of intelligence our scaly friends possess. Training any animal, let alone a reptile with such a difficult past, was completely new to me- and I believe that she has trained me, taught me and shaped me much more so than I have her. My perception of this ‘fierce beast’ has changed dramatically- I have witnessed her sweet nature, seen her excitement, and discovered her individuality. Training her has become my favourite part of the working week, and I cannot wait to see where we end up on our training journey together. 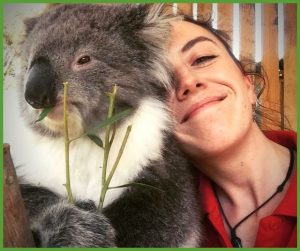 Hannah Wiggs is the Team Leader of Reptiles and Logistics at Moonlit Sanctuary, in Victoria, Australia. Whilst she grew up with a respect for animals and the environment, she only realised her desire to work directly with them post- high school, and indeed after dropping out of an unrelated university degree.

Her interest piqued after gaining employment in the café of Moonlit Sanctuary. To improve communication and understanding between ‘inside’ and ‘outside’ staff, she started volunteering once a week with the keeping staff. Within weeks, her priorities shifted more and more to the great outdoors – despite the infamous Melbourne weather. Shortly, she begun running nights tours and accepted an offer for paid keeping work.