One of the highlights of visiting – Moonlit Sanctuary Wildlife Conservation Park – is the ability to get up-close and personal with our Koalas. We run daily encounter sessions where visitors can enter a pod and cuddle up to one of our trained Koalas as they sit comfortably on their perch and busily snack on their favourite eucalyptus tips.

This blog post shares some behaviour management and training done with two of our parks Koalas, Mallee and Victor. Mallee (a beautiful 2-year-old female koala) arrived in December 2016 and our keeping team couldn’t be more excited. She was very shy but fitted into her new home very quickly. Additionally, two years ago, Moonlit was blessed by the arrival of Victor – a two-year-old male, all the way from South Australia. Victor came to us as a very friendly boy who could not get enough cuddles from his keepers, and he fitted into our encounter koala team almost seamlessly.

Fast-forward to 2020, Moonlit has been thrown some curveballs, dealing with our first-ever closure due to the Covid-19 pandemic. Whilst we were faced with new challenges in maintaining our animals’ daily routines and keeping them fluent in their trained behaviours, we were also granted some time to really focus on their training plans, get creative and try some new things!

Victor has always had a habit of leaping onto the ground in his enclosure and running over to his gate in anticipation of interactions with his keepers or visitors. In the video below you can see what this looked like with keeper Britt Beckett entering Victor’s habitat.

This behaviour had the potential of becoming a hazard for staff attempting to enter his enclosure to service or feed, with a koala waiting just behind the gate. With changes to staffing and everyone pitching in to help with the morning cleaning rounds in new departments, I set out to make our keepers’ lives easier by station training him on a perch in his enclosure. This would hopefully reduce his activity on the ground and make entering his enclosure safer for all staff.

With a 5-week plan ready to go, we began setting up his environment for success, changing some perches in his enclosure to create a distinct station perch as well as a ‘ramp’ perch for easy climbing up from the ground. However, as we were just getting started on his training, another curveball was thrown, as I (Caitlin Ondracek) became part of a ‘work-from-home’ team, working away from the sanctuary for two months. During this time, Koala Coordinator Britt Bishop continued his station training according to the plan, performing repetitions of picking him up from his station perch and reinforcing him with vigorous cuddles (which he often loves more than food!). From afar, I got to work supporting Britt by devising a way to break Victor’s association between sitting on the ground and keepers entering to lure him up, a situation that was doubly reinforcing, with keeper attention and food attained through this behaviour.

While I was at home, the planning process began with finding a way to deliver tippy leaf to Victor’s station from outside his enclosure. The position of the perch made it a challenge. We considered a pulley system or a swinging rope. Ideas were thrown around and the product of all this brainstorming was something simple but life-changing; the SnackStick! This contraption utilizes a flexible piece of PVC pipe on the end of a long pole, which can grab onto a small leaf pot sitting in a holder affixed to Victor’s station. The keeper can grasp and retrieve the leaf pot, fill the pot with tippy leaf, and return the pot to his station, all without stepping foot into his enclosure. I couldn’t be certain it would work until I could return to on-site work and try it out. After 8 weeks away, I installed the snack delivery system and it immediately removed any circumstance where a keeper could open a gate to find a koala in front of them or the awkward dance of raking an enclosure with a koala underfoot.

We started collecting data to see how his behaviour was affected by our new system, and we have found not only that his ground activity has reduced drastically, but also that in anticipation of keeper cuddles, he tends to go and sit at his station rather than leaping to the ground. This is a massive win!

Mallee was always a trusting and friendly little individual and we were ecstatic to see her confidence grow over the years. She was a part of our breeding program in previous years but was unsuccessful in each attempt. With such a patient and interactive personality, we decided to trial training her to participate in encounters.

Prior to the first COVID-19 outbreak and following lockdown in March 2020, Mallee was at the stage where she was ready to meet the public after weeks of training in the encounter area. The first few weeks of lockdown meant her fluent behaviours became non-existent and we found ourselves starting from scratch.

As Victoria (Australia) went into a second lockdown, we decided to put our time and resources into training Mallee. We began with a simple 5-week plan focusing on getting the environment set up for success. This included adding a horizontal perch close to the door leading to the encounter area. We also installed a flat, stable station point where the crate could be placed, allowing us to have our hands free whilst crate training. Once these were in place, Mallee’s crate behaviour became fluent, especially when we collected data to discover what her highest reinforcing eucalyptus species was.

The easing of COVID-19 restrictions saw keepers coming back to Moonlit and the extra hands meant Mallee’s training took leaps and bounds. With Caitlin back on the ground, we were able to train Mallee every day rather than most days and she was crating perfectly within a few days. She would even wait at her station for us to come and train her.

Our most exciting 5-week plan involved starting the process of introducing Mallee to her encounter pod. This included noise desensitization, getting used to the surrounding area, pats in a different environment, and crating in a different area. She flew through her small approximations and before we knew it, she was sitting in her encounter pod, happily eating whilst receiving pats from both Caitlin and myself. Her biggest hurdle was noise. We set lots of small approximations to help with this including the sound of rain, of crunching stones underfoot as people walked by and gates opening and closing to her pod. All of which she took in her stride over time. We are so ecstatic by her development and she is now officially meeting the public for encounters! In the future, we hope to work on crating her when we are going home after encounters (she often wants to stay for more food and pats). This may involve setting up our environment better or collecting data on which behaviours Mallee chooses to do when crating. Wish us luck! 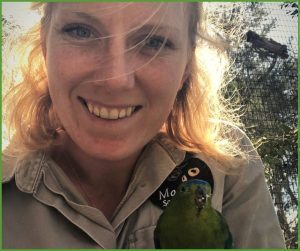 Brittanie Beckett is the Koala Coordinator at Moonlit Sanctuary, in Victoria, Australia. She grew up on a small farm and loved animals all her life. She realized she wanted to pursue her passion for zoology when she did a ‘zookeeper for a day’ experience at Werribee Zoo when she was 10.

Her career at Moonlit Sanctuary started straight out of high school in the park’s cafe. This helped her appreciate all the aspects of the business. A few years of volunteering weekly, birthday parties, and night tours saw Britt enthusiastically accepting a job as a keeper when her 3-year university degree was over. She feels so honored to work with such amazing ‘humanimals’ and incredible rare species every day.

Caitlin Ondracek is a wildlife keeper and records officer at Moonlit Sanctuary, in Victoria, Australia. Many zookeepers dream of their career from a young age, however, Caitlin changed paths a couple of times during tertiary study before finally landing in the wildlife conservation field. Initially leaning towards working in Entomology, she did a work placement at Moonlit and immediately fell in love with the park, the people, and the animals.

Caitlin has taken on many roles as her career has progressed, contributing to the park as an education officer and records officer alongside her keeping role. With a family background in teaching, she has found a love of educating the public on native species and the conservation efforts being undertaken on a large scale and at a community level. She has also begun a journey to learn more about animal behaviour and training, specifically the challenge of discovering the strengths, abilities, and reinforcers for Moonlit’s Koalas.