I had said to a friend “as long as they don’t hate each other and there’s not incessant barking, I think it will be fine.” By day two, I was convinced Mija hated Cross and in part, because of his incessant barking!

I’ve lived with multiple dogs most of my life, but rarely have I been thoughtful with introductions.  I usually let new dogs meet on “neutral territory” as I always heard that was a good idea, but after meeting on neutral ground, the next step for me was  “we all live together now” and then I would follow the general advice of “dogs will be dogs” and “let them work it out”.  I was mostly lucky with this laissez faire approach, although I did run into challenges with one pair of dogs that I think could have been avoided or at least lessened with more appropriate introductions.

Recently, I decided to foster an eight-month-old lab mix, Cross, and then shortly after he was adopted to an amazing family, I adopted a little puppy, Castor.  I’ve been deliberate about the introductions of these new animals to the household and I’ve learned a lot through that process.  Ryan Cartlidge of Animal Training Academy would say (and did say I think!) that these decisions were like “jumping into the deep end of the pool – and then splashing around until you learn how to swim”.  Based on my experience, here are a few of the things that have allowed me to jump into the deep end of that metaphorical pool and that have helped to keep me afloat so far. 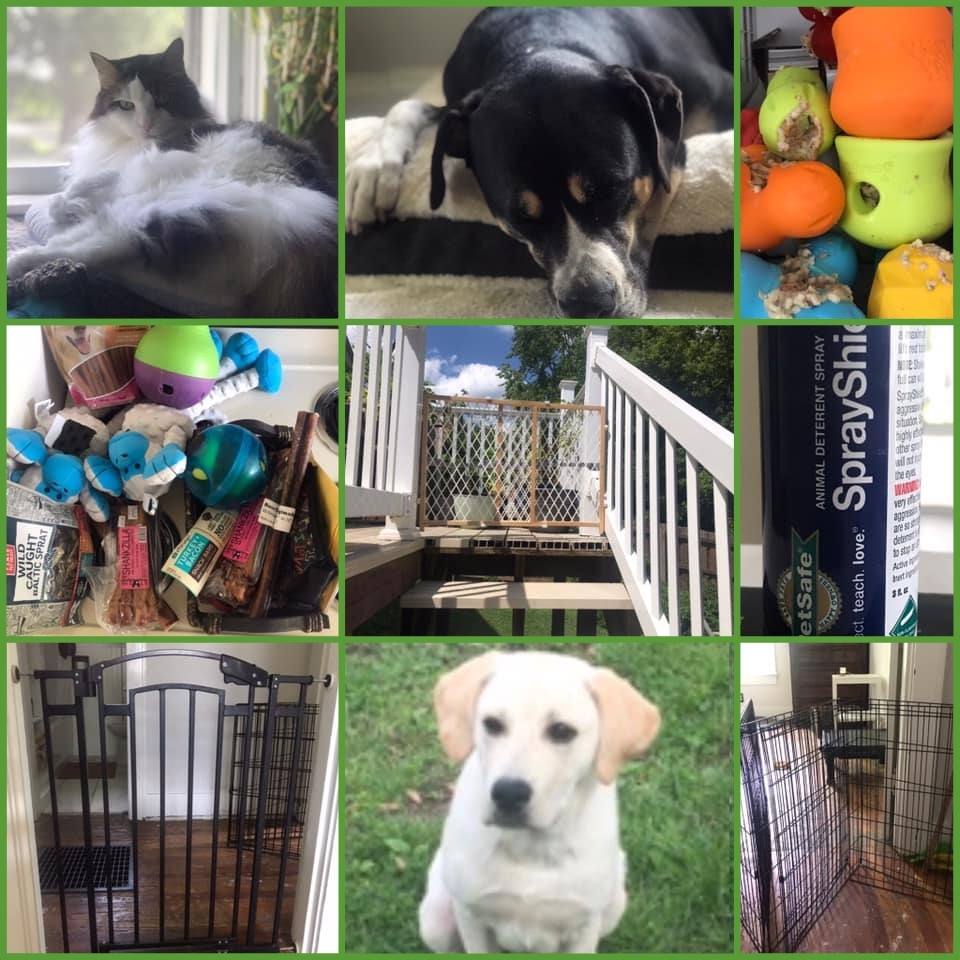 Before jumping into that deep end of the pool, I made sure I had taken some swimming lessons.  Lessons included learning from years of living with multiple animals, observation of multiple animals who I have had a chance to work with, education about animal behavior (I’m a bit addicted to learning about animal behavior!), and making use of available resources about animal introductions.  In thinking through what bringing another animal into the house might look like, I relied heavily on a wonderful article written by Ken Ramirez that I have read several times over the last couple of years  “Marlin Meets Tulip – A Systematic Introduction” (see article HERE).

Although I do not have the luxury of living anywhere as spacious as The Ranch, the principles discussed in this article were a help in planning to bring each of these new animals into my home.

One of the important pieces of planning before bringing a new dog into the house was thinking through what antecedent arrangements would best keep everyone safe, as comfortable as possible and generally set us up for success (see picture above).

Due to a remodel project, I have an empty room on the first floor of my house.  In that room, I set up a dog crate, and put enrichment items in the crate, as well as throughout the room.  Some of the enrichment items I had on hand were snuffle mats, Kongs, West Paw toys, natural treats and chews, synthetic chews, puzzle feeders, stuffed frozen Kongs, and a variety of toys. Some of these things went in the crate and room, and some went in a stash to be swapped out later.  I also have a Pet Tutor and that ended up being a life saver. That room has a door on it that could be shut if need be, but I also put a gate in front of the door, so I could shut it entirely, or leave it open for visibility between the animals. Outside of that room is a hallway where I put another gate, so the new animal’s territory could easily be expanded to a room and a hallway.  On the other side of the hallway is a dining area where I often positioned myself in the early stages of introductions and on another side of the dining area is the living room and the stairs to the second floor of the house.  I put a large gate there so that Mija, my existing dog, had access to the couch, her crate, all of her toys, and the upstairs for total escape should she want it.

Now that I have a puppy in the house, I have also added two exercise pens to this set up – one in the dining room, and one in the living room which has helped not only with systematic introductions, but also with potty training, preventing jumping, preventing chewing, preventing tons of hopped up play in the house, etc.  Oh!  And I live with an amazing kitty, Wednesday, as well, and I made sure she had access to her private get away in the basement as well as access to everywhere in the house except the new dog’s living quarters. Thinking through what types of gates, crates and pens to have, and where to put them has been critical in safety, management and systematically introducing these animals.

Another important planning piece before ever bringing either dog into the home was thinking through how the dogs should first meet.  In both instances, I decided to have the dogs meet outside of the home, with the new dog being handled by someone my dog knows and loves.  With Cross, we had the luxury of meeting a few times off the property and doing some parallel walking with this friend.

What that looked like was, my friend would be somewhere with Cross, I would show up with my dog Mija, we would be quite a distance from each other, and we would start making our way toward each other.  As we made our way toward each other, we would do a lot of weaving and horizontal walking, talking as we got nearer each other.  I did a lot of marking and reinforcing eye contact from Mija, and my friend marked and reinforced any focus toward her at all from Cross.  Once we got within about twenty or so feet of each other, we would start walking parallel with each other, so we were all just on a walk together, but with a good bit of distance between us.  We used the dogs’ body language as a guide to decrease (or increase) distance.  After a couple of walks like that, we walked in the house together with Mija walking in first and Cross and my friend walking in second.  I put Mija behind the gated area she would be hanging out in, and Cross in “his room”.  While Cross was here, I was very lucky in that I had several friends who were a huge help and who continued to come over so we could go on walks like that.  Over time, we let the dogs interact a bit on these walks and then play in the yard together on multiple occasions.  Things were a little different with Castor because he was not quite nine weeks when he came here, but the principles – slow and systematic still applied.

Even if one has taken some (metaphorical) swimming lessons, it is still a good idea to make sure there are going to be some lifeguards on duty or at least some floatation devices in the pool before jumping into the deep end.  Thank goodness for the Animal Training Academy membership because it is full of both!  Before bringing Cross home, I asked for advice in the ATA members only Facebook group, and after bringing him home (and since adopting Castor), I posted regular updates and sought specific feedback to help with the introductions, and I received so much wonderful support!  I won’t lie, it was initially stressful having Cross in the house. I had said to a friend “as long as they don’t hate each other and there’s not incessant barking, I think it will be fine.” By day two, I was convinced Mija hated Cross and in part, because of his incessant barking! I took Mija on a car ride on that second day just to get us some peace and quiet and think, and that is when I remembered I had filled the Pet Tutor up and then forgotten all about it. When I got home, I set Cross up with the Pet Tutor and it was like magic!  He instantly started offering some quiet, calm behavior.

6) The power of the pattern

I went into the ATA community and shared some of my challenges and  Leslie McDevitt jumped in the conversation and gave me lots of great suggestions of how to use her 1-2-3 and voluntary sharing pattern games (both games can be found in her book Control Unleashed: From Reactive to Relaxed . Others shared their experiences and suggestions to help me modify things I was doing.  The support of the ATA community as well as the resources that exist within the ATA community have been super helpful in all these recent dog introductions.

I’m so glad I have recently chosen to jump into the deep end of the pool.  In doing so, I have learned a ton about myself, the animals I live with, how to be a better trainer, and more. Too often, I look at the people doing gorgeous high dives into the deep end and I think, “well, I can’t do that!” and so I sit on the side with my feet dangling in the water where it’s comfortable.  It is important to realize, most of those people weren’t born amazing divers and swimmers, but they took lessons, made sure safety measures were in place, and jumped in and probably splashed around a bit on their way to becoming beautiful divers and swimmers.  Once I have taken the lessons and made sure I am surrounded with some safety measures, it’s time to jump in!

Shelly lives in Cape Girardeau, Missouri, USA where she shares her life with her dog Mija, a cat Wednesday, and a new puppy Castor.  Shelly has a Bachelor of Science degree in Social Work and a Bachelor of Arts degree in Spanish and has worked in the non-profit sector with Early Prevention Impacts Community (EPIC) for ten years, working as both a project coordinator, and project facilitator during that time.  In 2013, Shelly worked with the EPIC Project Director to develop EPIC Pals, an animal centred social and emotional learning program.  Shelly graduated from the Karen Pryor Academy Dog Trainer Professional program in 2016 and is a Karen Pryor Academy Certified Training Partner.  In 2017, Shelly started Drop Your Jaws Dog Training where she works with people and the dogs they live with teaching basic manners group classes and doing private consulting.