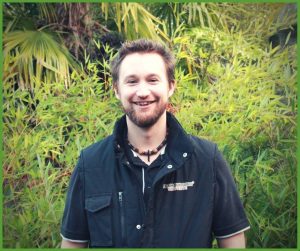 Mark Kingston Jones has been involved in the animal welfare field since 2004. He is the Co-Founder of ‘Team Building with BITE’, and Workshop Coordinator and Level 1 Instructor for international charity ‘The Shape of Enrichment’. In addition to running 35 of his own Student Environmental Enrichment Courses, in the UK, he has been an Instructor on 25 SHAPE workshops and 4 others, in the UK, USA, Indonesia, South Africa, Romania, Russia, Lithuania, Uganda, Vietnam, Singapore, Armenia, India and Croatia.

After completing his BSc in Psychology from the University of Stirling, he began his career at Blair Drummond Safari Park, Scotland. He then moved to Howletts and Port Lympne Wild Animal Parks, Kent, where previous to becoming self-employed in 2014, he worked as ‘Head of Education and Research’. In addition to organizing talks, workshops and conferences he has organized over 150 team building events, as well as working with keepers to design and implement enrichment ideas.

Mark is the SHAPE-UK & Ireland Events Co-Coordinator, an Honorary Research Fellow at the University of Kent, an Enrichment Advisor for the British and Irish Association of Zoos and Aquariums (BIAZA) Animal Behaviour and Training Working Group, an American Association of Zoos & Aquariums (AZA) Enrichment Instructor, and Trustee for Lakeview Monkey Sanctuary. He has been an author/co-author on 13 publications and presented 60 talks and workshops at conferences, both nationally and internationally.

What we will cover in the class