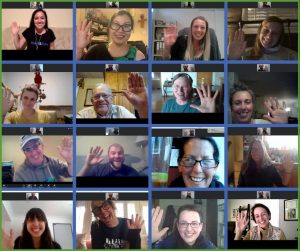 The idea for this class came about after connecting with so many ATA premium members in one on one calls over the last 2 months! All up I have done roughly 60 of these calls (with more still to come). One thing I soon realised was that the scheduled 20 minute timeframe per call wasn’t enough – so most of us ended up chatting for over an hour! In total that means — time-wise – I have spent 4-5 days straight talking to the AMAZING ATA membership.

There were numerous topics of interest that I found were repeated in these calls. One of these concerned how we can improve our skills at processing both our emotions & thoughts when we see others using aversives. Consequently, I felt like I might have something to contribute here – based on my experience practically applying the tools from crucial conversations over the last decade.

Then through a number of polls (we ran in our ATA members only FaceBook group), it was chosen that the class would focus specifically on;

Conversation skills to help engage with someone who doesn’t necessarily know they’re using (what we might label as) aversives. **

AND working through some examples in real time (i.e.live) in the class! … After some careful thought & consideration though, it was decided that using real examples would be unethical – as the people involved would not be present and/or would not know we’re talking about them in this forum. Consequently, instead I will be joined by two ATA members who will each bring a hypothetical situation (but one you can relate to) to the class for us to discuss & unpack.

The two AMAZING members who will be joining me are 1) Josefine Linderstrom (from Sweden) & 2) Cristian San (from London, UK). And to make it as authentic as possible I (Ryan Cartlidge – the host) won’t know what the actual examples are until we’re live in the class on the day! I.e I will find out what they are at exactly the same time you do!

We look forward to seeing you live with us!

** Aversive = Something our animals given a choice would avoid/move away from.